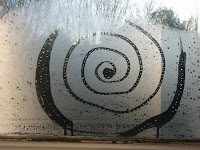 Perhaps it's not too clever an idea to read the news online at guardian.co.uk before posting to this blog. Tends to colour what I want to write about.So- for once I'm not going to wiffle on about the disastrous political shenanigans going on in all our names over in Poland. Nor am I going to bore y'all to tears about the paucity of moral fibre that has led to us all saying yea to a vastly expensive bail out of the US car manufacturers. Not to mention the Merkel-led suck-up to the German automobile makers , but we're not, not NOT going to go on about that.

That way lies madness. And spiralling around in ever-decreasing circles is not what I want or need right now. Right now, here is my wish-list for this festive season.
1. A posse of endearingly fey elves to do my bidding. Ooooh yes. Left a bit, right a bit, mmmmmm, don't stop.
2. A personal shopper to go and fetch what is on everyone else's lists so that I won't have to go and engage with the madness that is Edinburgh retail.
3. A pop-up masseur to iron out the wrinkled bits and a miraculous re-elasticization of my aged skin combined with a targeted weight loss in all the right places.
4. A heeeeuge and hitherto undiscovered royalty cheque to materialize in tomorrow's post.
5. A clear and present idea for the text for my next picture book.
6. A sudden ability to bow my fiddle like a diva, and a gift for being able to play Shetland reels at full speed rather than my feeble dead s..l...o...w efforts at present.
7. Oh, yeah. World peace, massive and mysterious reduction in the ppm of carbon in the atmosphere and Love for all.

LOVE is all there ever was.. Nothing else matters. Happy pre- Solstice to one and all.
Posted by Unknown at 7:06 PM

And a lovely full-moon snowy night to you!

I just hope not to encounter too much death and mayhem at work and to be able to spend a nice, quiet Xmas Eve with my beloved.

Oh, and no more ice storms. At least not until we can afford to install a wood-burning heat option.