She piddles, she fins 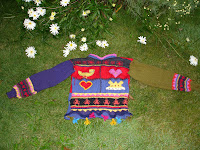 Or something like that. She does both in between bouts of full-on dragoning, but she also wakes up in the wee small hours with a feeling that she ought to get up and Get On With It. Like why am I lying around in bed, pray? Don't I realise that there's stuff needing made?
Had a brief foray into The World of Seasonal Commerce last week. Tooled round various children's toyshops, growing more bleak and unseasonal as the minutes rolled past. All around lay pink plastic, batteries, fake pets rolling over and playing dead, more batteries, muzak, cheesey songs with tone-deaf celebs exhorting us to feel guilty for our affluence, long queues managed by idiots who plainly enjoy the power of going as s..l..o..w..l..y.. as they can get away with before a sudden stampede of enraged shoppers club them to death with the latest Harpy Otter Deathmask with Light-up Gonads ( takes 37 AA batteries, not included) and people looking utterly miserable...
Coming back home with a few bags of toys I barely had time to do a quick Witch Baby cover rough and then rush back out again to go to the Society of Authors' Winter Party. Jeez.  Being self-employed and in straightened circumstances means that days which pass without earning diddly-squat are days on the debit side of the Great Ledger Book. If these kind of days aren't spent doing something worthwhile like spending time with one's children, walking on a beach or climbing a hill, then they are wasted days. Wasted. Spending a day shopping is not good for my soul.
And the food at the Winter Party was the wrong side of atrocious. Next year I should offer to do the catering - I'd probably make more in one evening than I do in a whole year of selling books. Plus I had a robust discussion with a right-wing fund manager who spent most of the coffee and mints course proving what a fine fellow he was, and how he knew better than the IPCC about the likely outcome of runaway climate change. My pet subject, hijacked by a fuckwit? Oh, joy.
Let's draw a veil over that, shall we?
The knitted dolly in cotton glace for my youngest daughter is progressing nicely. Two legs, two arms, a pair of pants and half a torso are done and dusted. Must go do some more. The youngest daughter is the same child for whom I knitted the jumper at the top of this post. Amazingly, she still loves it. Amazingly, it's still in one piece.
Posted by Unknown at 8:46 PM No comments:

I knit and fiddle not

Not that I'm slacking, but the action on my dragon book has ramped up a tad, and of an evening when I would normally hit the keypad and start to blog for Caledonia, I've been collapsing on a sofa with a chunk of Green & Black's white chocolate in my mitt. This is having predictably disastrous consequences for my complexion and waistline, one of which is expanding while t'other is maculating, or peccabling or whatever you call it when someone old enough to be a grandmother starts developing zits on her chin due to chocolate excesses.
The knitting urge has collapsed temporarily due to the deep tedium of knitting a seemingly endless and boring man's sleeve in unrelenting Jaeger dark green dk wool. I say unrelenting because the eventual recipient of this sleeve ( at current rate, in the year 2097) was not wooed by the beauty of Kaffe Fasset's little circles pattern and opted for the plain jumper sans ornament, sans teeth, sans everything.
Today I came to the conclusion that what I need is a hideously tight deadline to knit to, and not to knit the sodding sodding sleeve any more. So. It's tucked away on its turbo pins and I'm already beginning to hyperventilate with the sheer excitement of doing Something Else and doing it in time for Christmas. Today I phoned John lewis in Edinburgh and begged them to go out back and hunt for some glace cotton so that I can knit a doll for my littlest daughter. John Lewis being what it is ( a family-owned concern which has hauled itself into the 21st C while still clinging to some rather 20th C practices in the middle of achieving vast commercial success)  I was patched through to a slightly breathless lady of, I'm guessing, middle years, who puffed into the stockroom, clanged around with a set of metal stepladders, and found two balls of the right stuff for me to be able to begin a New Thing.
The yarn will come in the post, but in the meantime, I'm embroiled in making gaberdine and grosgrain bags for the extended family's presents. Every year we give each other home-made things - advent candle wreaths, jars of mincemeat, stollens, knitted hats and shawls and assorted things that show We Care, but Are Inept.
Sort of thing. The gaberdine bags came about after trawling the web one night and finding myself on the compelling site dedicated to Modbury, the town in England that eschewed the use of any plastic carrier bags, and showed the reasons why you might want to join their campaign. Rather than bore the arse off everyone with proseletising zeal, I thought it would be better to make carrier bags of such outstanding durability and uber-chic that none of my family would ever want to be seen with a plastic bag ever again. That was before I discovered how damn hard it is to make uber-chic anything. (q.v previous years' attempts at hats, shawls, etc.)  This, or these ( as in the bags) as well as the dragon book are why I haven't knitted or fiddled for a wee while. The bags (all seven of them) are nearly all sewn together and awaiting decoration.  Not being a natural seamstress, the air around my sewing machine is still blue, although nothing like as bad as the air surrounding my kitchen the year I made home-made hampers for all family members.
God. What a laff that wasn't. To this day, I only have to mouth the word 'hamper' and my entire family begin to twitch.  They were hampers born of the long dark teatime of the cook's soul. They were hampers of such byzantine effort and complexity that the hampees ( I know, there is no such word) looked more haunted than delighted at the gift. Hampers contained bottles of creme de cassis, corked and sealed and labelled with illustrated labels; pickled pears; a tiny decorated bag of organic hand-made cantuccini; jars of marmalade, blackcurrant jelly and green tomato chutney; stollen and if that wasn't enough to make your eyes cross,  everything was arranged in baskets inside of which were nests  made from the shreddings out of my studio document shredder.
What the hell was I thinking of?
Haunted by the spectre of dyspepsias to come, the hampees accepted these monsters with cries of polite terror. Oh - you shouldn't've. Too right. Heavens, what a lot of trouble you've gone to. Alas, yes.  Whatever, never, never again. My family made me swear an oath upon my sacred cantuccini recipie. I will never make hampers for Christmas ever again. Gaberdine bags are a breeze by comparison.
Well, maybe a bit stronger than a breeze. Let's say a force five.
Posted by Unknown at 7:31 PM No comments: