I'm so lucky to return to what I call Da Bonnie at the end of a week on tour down South. After meeting and sharing my new book with over a thousand very small children, it's utter bliss to come back to the land that nourishes me. The journey North, through a land shading towards autumn, is beautiful. Through the Lakes and Lockerbie, past velvet greenclad Leadhills, swallowing up the miles to Waverley, my heart growing lighter as each clicketty clack of the train brings me closer to those I love.

And, it has to be said, to ma ain pillow. Oh! The wrestles I've had with disobedient hotel foam pillows in the wee small hours. They do not take a telling. Pound and fluff and prod as I do, they remain stubbornly bouncy, hot and uncomfortable.

And home is so quiet. So very quiet. On tour we've had traffic, other hotel guests ( may their larynxes temporarily shrivel) pinging lifts ( dear god- ALL night?) drunken passersby, screaming, roaring women- at four a.m? My heart goes out to them but also, please, somebody, make it STOP.

So home, with its 5am milkman and 7.30 tractor. With its raucous dawn chorus of blackbirds. With its starlings that nest in our roof. Home.

With all that sustains me and all that I love. After the wardrobe crisis which I'll spare you, I have to pack a portable studio to go on tour. This is so I can
a. Do 'live' drawing, although one suspects they'd sell a lot more tickets for 'dead' drawing.
And b. Keep a drawn diary at night, after the day's work is done.

Last year, on tour with What's the Time Mr Wolf? I tried to be all 21stC and drew a tour diary straight onto an iPad, but d'you know what? It looked totally hideous. I am too much in love with the tools of my trade- pencils, charcoal, chalk, watercolours- to find that their digital substitute can come even close to touching the same deep pleasure centres as, say, the glorious happenstance of a stipply, puddled wash in watercolour or a grainy swipe of coal-black charcoal shading to sea fog that perfectly captures the mood.
So. Here's what I packed for next week's drawing. I only hope my phone is up for taking photos and that the 3G signal will relay it all to you. 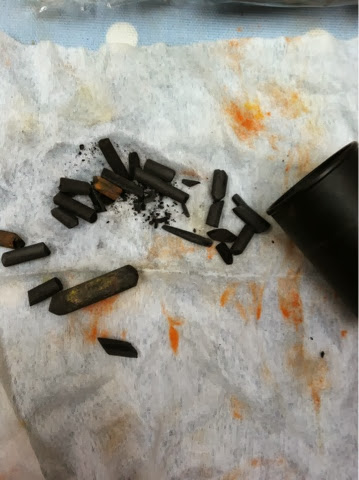 Posted by Unknown at 3:07 PM No comments:

A pebble dropped in a pool 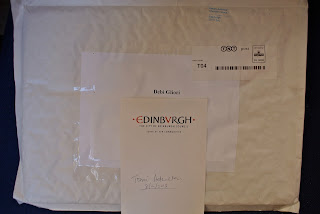 An envelope came in the post last week.
Inside it was another envelope with German stamps and an airmail sticker. 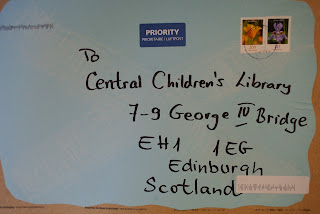 Inside that envelope was another envelope. 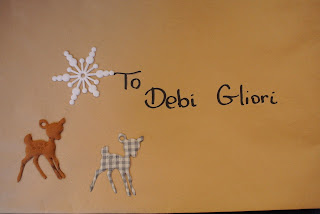 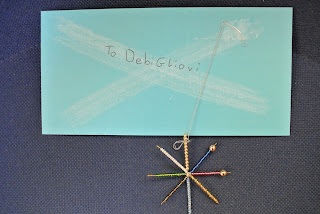 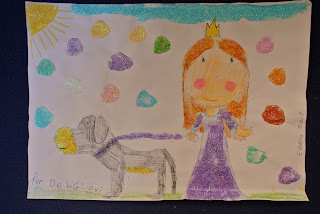 I wish our computers could do glitter, but they can't. You'll have to put the sparkly, glittery stuff on with your imagination. I think this princess is beautiful,
with her aquamarine eyes and fuschia blushes on her cheeks. I love her dog too - with its golden muzzle and matching tummy.

I sincerely hope I've got this right, Emma - if the princess is actually holding the reins of a horse, please accept my sincere apologies. I don't really think it matters. I love this picture for lots of reasons, and the dog/horse question isn't one of them.

Anyhoo. The other thing in the blue envelope was a letter. I'm not going to post a photograph of the letter because it is private, and Emma, who wrote it, is entitled to think that her beautifully written letter was only going to Debi Gliori, not to the WorldWideWeb. Emma wanted to let me know she's really enjoyed one of my stories - she may have said to her mummy or daddy -I really liked that story - and they might have said - Why don't you write to Debi Gliori and tell her? So Emma did. Emma, being small, might have assumed that her mummy or daddy would know where Debi Gliori lived.

Well. They didn't, but they knew who would know. Somebody in Emma's family was paying attention, because they read on the flyleaf of Emma's book that Debi Gliori lived outside Edinburgh, and they knew exactly who, in the huge city of Edinburgh, would know where to find that ex-directory, not listed in the listings, rather hard to find Ms Gliori.

Yes. A librarian. At the rather grandly-titled Central Library, in Edinburgh. With total confidence in the vast knowledge-pool housed in the Central Library, Emma's parents posted their daughter's letter with its precious contents all the way across to Scotland, and a few days later, I had an email from a librarian, 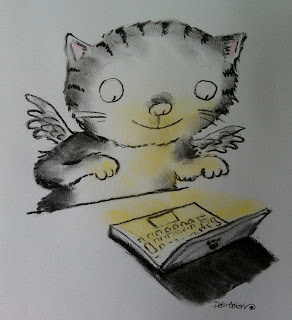 explaining that a package had arrived from Germany and would I be willing to furnish the library with my address?

All of this against a backdrop of Terry Deary's pronouncements that the service is rooted in an outdated Victorian sentimentality. And the death from a thousand cuts which are felling libraries in some of our poorest regions. And the desperate campaigns to 'save' libraries. The petitions. Marches. Speeches. The feeling that we are plugging a colanderish dyke with nothing like enough fingers. And a growing sense of the deaf, deaf ears our pleas are falling upon.

If we lose our libraries, we lose something infinitely precious. Open, unrestricted access to the written word. In a library you do not have to pay to read. To download. To fill your head with the wisdom of centuries of human thought. Anyone can use a library. And sometimes it is just one book, one chapter, one encounter with the written word that a life turns upon. A pebble dropped in a pool with ripples spreading outwards, all through the years beyond the initial moment where stone met water. For children raised in homes where books are not, a library may be that child's only chance. Nope, that didn't take. I'll say it again. A library may be that child's only chance.

Back to Central Library in Edinburgh. The generosity of the librarian's gesture was humbling. Emma's parent's faith in the library system was deeply encouraging. The whole episode was hugely cheering ; a lovely example of the goodness of people, the kindness of strangers and the way a book, a story can make a difference, however slight to people's lives.

It would not have had anything like the same impact if the entire correspondence had taken place by e-mail. I held Emma's drawing in my hands and glitter fell off onto my kitchen floor. That's a real connection. I will treasure her home-made star and I will hang it on my Christmas tree for years to come. And when I do, I'll remember who sent it, but I won't forget who made sure that it reached me.
Posted by Unknown at 9:21 PM 6 comments: