so far to go

Spent a large part of last night's session with the Fiddlers wishing I was a better fiddler than I am now. This has probably got everything to do with the fact that the wee reel I'd practised assiduously all week and thought - hey, I'm getting the hang of this - turned out to be one of those tunes that require playing with one's bow a blur and fingers flying. Like an old 33r.p.m L.P played at the speed of a 45 r.p.m.single. Or a treadmill at the gym speeded up from walk to sprint. Aaaaargh. Fingermangle. How the heck...? Donald says it's muscle memory (obviously my muscles have got dementia) and Pete says don't think about it - it's easier.Oh, how we laffed.

As with most things, it's practise. Or practice. Just do it.

But supply your family with ear-muffs and plugs before you begin.

There was a stunningly talented piper at the session last night. Small pipes, I hasten to add .The piper's effect on the resident black labrador ( Fergus) was marked. Fergus came round all the fiddlers, one by one, looking for reassurance that the Boy With The Waily-Waily Thing was actually Safe. Poor Fergus. not only having to put up with weekly infestations of fiddles, but now a plague of pipes?

But even if I do practise till my fingers bleed, I'll never catch up with the Fiddlers. I swear they've all been playing since they were tots, like me, but unlike me they didn't give up in their teen years, and carried on fiddling all the way through their twenties, thirties, forties and are now amazing. Really, truly amazingly talented people. It's a joy to occasionally have a tune with them.

At least ritual humiliation-by-fiddle took my mind off the terrors of packing for Bologna. I'm over that now. I've been to have my first hair-cut for a whole year, and...well...it's signally failed to have the desired morale-boosting effect. Perhaps I should have embraced my Inner-Harridan/ Unst Granny* with the long wild hair , but I had a yen for sleek shiny hair ironed flat. I know, it's lamentable to be so damn vain especially when you're ( whisper it) Getting On A Bit- but my Inner Fluff-Brain occasionally does get her turn in the driving seat and such is her unfamiliarity with the controls ( ooooh, what's this knob? gosh, I wonder what happens when I press this one? what's that siren sound? why are there red flashy thingsin my rearview mirror?) that it's a safe bet that it will all end in tears.

So - not quite tears, but it is a pretty indifferent haircut, made even less flattering by the fact that due to advancing decreptitude, what I now appear to have is a sleek headful of grey ironed flat stuff. I look, in short, like I'm about to audition for Blake 7.

* Thankyou to Mel for this glorious image. Unst Grannies, Fetlar Uncles, Yell Spouses and suchlike can all be found at 60 degrees North.
Posted by Unknown at 3:53 PM 5 comments:

Coming up for air 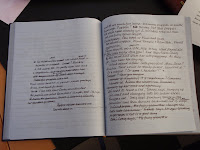 So that's what I've been doing for the last fortnight. Writing, thinking, scoring out and writing again. And doing two heeeuge events with children in Liverpool for World Book Day, one rather quiet event in Glasgow at Aye Write and finally two more events in Craigmillar which is full of good people living difficult lives exacerbated by appalling poverty, below average literacy levels, above average social problems all within some of the crumbling remains of one of Edinburgh's most shameful public housing estates. Needless to say, out of the five events I've taken part in, the two in Craigmillar were easily the best fun, the most rewarding and the ones I will remember for a long time to come.

Although, it has to be said, standing up on stage in Liverpool under hot, bright lights in front of heaving rows of hundreds of children was pretty memorable in terms of Need For Clean Underwear.

I used to think that being a children's writer guaranteed one a life of quiet, contemplative self-reliance. A sort of love affair between a Zen vegetarian and a Beat Poet who moonlighted as a Lollipop lady. These days, it's more like being the product of a one-night-stand between a rock star on the downward career trajectory and a hermit with literacy issues. The job description has changed beyond all recognition. I suspect E. H. Shepard would have been horrified at the prospect of 'drawing' on an interactive whiteboard, even in front of an audience of adoring fans.

Now, before the next tranche of editorial input, I'm having a wardrobe crisis of epic dimensions because next week I'm off to the Book Fair in Bologna, Italy. When you are fortunate enough to spend the majority of your working life tooling back and forth from your garden shed with occasional sorties to the supermarket, you can grow very accustomed to wearing whatever you wore the day before, even if that was what you wore the day before that, and regardless of the fact that it makes you look
a. old
b. fat
c.like you really have given up any pretensions to elegance or style
and d.as if you are acknowledging your Inner Harridan

This is all very well until you are ripped untimely from your cosy cocoon of Dressing Down. Dressing from your vast selection of washed-to-death and decidedly greying Couture Noir. A.K.A. Dressing for Expanded Waistlines and Comfortable Comfort Eating. Whatever. Suddenly you have to Dress for Work. This never fails to throw me into a complete state of terror, which will lead to my travelling with a suitcase of ludicrous heaviness and, I can guarantee, will entail a long, dark teatime of the soul in an uncharted pensione during which the complete contents of said heavyweight luggage will be tried on in various combinations with escalating cries of dismay as all are found wanting.

Don't even get me started on what shoes I'm going to take.
Posted by Unknown at 8:29 PM 3 comments:

Please forgive the long hush/gap in comms but February went by in a haze of deadline fatigue. Don't think I've ever written a book quite as fast before, and frankly, it's not an experience I'd care to repeat, but a bit like what is coyly termed a 'precipitate labour' ( think three contractions and you're done...) it does at least have the advantage of getting the horrible bit over and done with quickly.

Yes- sometimes writing is horrible. It's a shocking admission, but after several of the great and the good 'came out' in last week's Guardian to tell all that they loathed writing and would rather floss with a circular sander than sit down with their blank pages day after day after day, I feel empowered to add my name to the list of Authors who Wrestle with Demons. It's not always the pits, but for a fair amount of the time I spend sitting at my desk conjuring words out of thin air, it is a lonely, gruelling task, and one that I can come to dread if the writing isn't going well.

Why do we do it? I can only speak for myself in saying that I go through the grey blahhhhs secure ( -ish) in the knowledge that eventually, I'll emerge out into the sunny uplands. The good outweighs the grim, and the good feels so damn good that it's worth the pain. Or something like that.

Last week we had World Book Day which involved loads and loads of children and not nearly enough cakes, and the week before, I had a Significant Birthday which involved loads of trekking across peat bogs and narrow cliffside goat-paths and not nearly enough lazing around sipping champagne and eating chocolates. And for the three weeks before that, I was doing a fine impersonation of Boring Mummy Who Shrieks and Writes 24/7. Not, I must say, a good look.

Now I'm deep in the Edit, which is a stage I've come to relish ; far more craft than Art, but consequently, the pressure to create is lessened, and the sheer enjoyment of refining, honing, tweaking and finally polishing is putting a smile on my face and a spring in my step. Sadly though, it's not putting a whole lot of moolah in my bank account, but hey - these days, why the heck would I want to put anything in one of those? Banks? Meh...

And finally, today felt like spring was winning. Time to redecorate the blog. Much as it pained me to take down the dragons in the snow picture and haul it upstairs to the blogattic, I hope its replacement finds favour. The running foxes with wind-tossed trees are from a book called Stormy Weather which, if Western capitalism doesn't crash and burn beforehand, will be published this coming October.You saw it here first.
Posted by Unknown at 10:14 PM 3 comments: