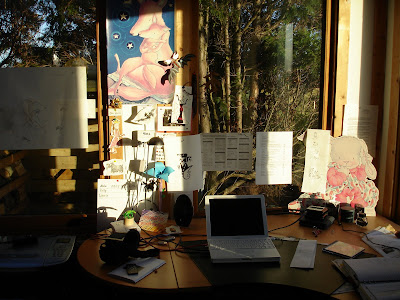 This is where I am. The chair looks comfy, but as I get older, despite spending a fortune of Snap Crackle and Pop with a horrible chiropractor, my neck hurts like billy-o when I sit driving the desk. There's a drawing board/drafting table out of range of the photo, for when I draw, but since I'm in a writerly phase right now, I thought that the writing desk was germane. The bunny in pink is Willa from Joyce Dunbar's book Tell Me Something Happy Before I go to Sleep which I illustrated waaaay back when I was pregnant with my youngest daughter. Got so big I could barely reach the watercolour paper with my brushes and I was parcelling the artwork up to post to London when I was in labour. The black lizard/salamander is Orynx from my novel Deep Trouble, the long huge poster of the fox mummy and her child is from my best book ever called 'No Matter What' and if you've got very sharp eyes you'll just be able to see the sheriff's badge pinned to the wall just below the foxes, on the bottom left hand corner of them in fact. That badge is one of my most precious possessions and was given to me by a lovely sheriff in Kansas right at the very end of a book tour celebrating No Matter What being the book chosen for the inaugural Kansas Library's One Book One State initiative. By the time the sheriff barrelled into the diner where I was eating a late supper before falling into bed and then flying home the next day, I was so trashed that my voice had disappeared. What a tour that was. So moving, so heartbreaking and so life-affirming at the same time.

My inspiring view is out to the woodpile and, you can't see, but I can, to the compost heap. I could, if I turned my chair through 90 degrees, look out on sky and hills, but d'you know what? I prefer my wood and compost.And right now, today, i'm looking out on hailstones.

the call of small islands 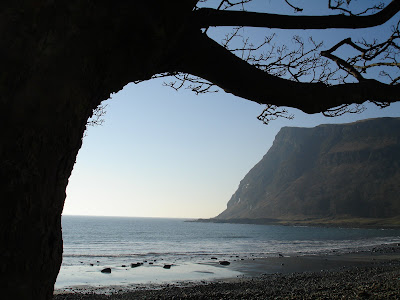 The medium of blogging, or this particular aspect of the medium is driving me completely nuts. I would blog far more often, but hell, I'm an illustrator, and I want to be able to illustrate my posts without undergoing the mother of all technology crises every time I try to make my blog look a tad more personal. One of the downsides of working for myself is that there's no I.T. department to call when things go wrong. If it's broke, I have to fix it. just as there's no lovely person to come in and clean up my mess in the studio, make my train reservations, plan my travel, invoice my clients and wrap my artwork. On the plus side, we don't have a vast wages bill at the end of the month - there's only Michael and I to pay, and heck, we don't earn much anyway.

So that's all right then.

Lordy, the Money Hum hasn't eased a whole lot. This year is shaping up to be the year we got Reality. Oil is going through the roof, the city is in turmoil, food is going up in price in a rather scary fashion and the icecaps are melting far faster than anticipated. Reasons to be cheerful? Well, spring is hard on the heels of winter, and that is always something to gladden the heart. Primroses, buds, blue skies, blackbirds hauling unfortunate worms out of newly turned earth - all of these are immensely comforting markers that make me believe that the good times will roll again, but perhaps not the good times that are predicated on commerce in all its multiple manifestations. The photo above was taken on the 12th February on the island of Mull on one of those days that are a gift from the weather to the Celts. It was a golden day - we were all gilded by it.

We walked round the coast, puddled in rock pools, ate a picnic by some vast boulders studded with uncut raw sapphires, took photographs of the wild goats whose coastline it really was, talked, laughed and all the time, Mull was driving a deep hook into us all with its immeasurable beauty.I swear, if we can do it, we're going to find a way to live there.

For now, though, we have to keep afloat. We're running an exceedingly tightwadded ship right now, and at times it can feel a bit constrained. I mean, it's not as if we ever did have much of an extravagant lifestyle - rarely going out, neither of us having expensive habits, both, in truth being rather boring old farts whose idea of a good time was a good book, a dish of decent olives and a well-mixed G&T. We still have that, even in these days of big economies. There's a big part of me that relishes making a little go a long way. A part that remembers that most of my life was spent with not very much money. In truth, I'm happier with less, if that doesn't sound utterly bizarre. I found myself doing housewifely things like mending a linen sheet by turning the outsides into the centre and sewing them together. I also made pillowcases from an shredded lined sheet. less you think I've completely lost my marbles and mojo simultaneously, can I just say in my own defence that I love sleeping on real linen sheets, but to replace out over 100 year old ones would cost over £400 per sheet.

That's why I was being so unaccustomedly hausfrau-ish. And it felt good. it felt like I was following that maxim of recycle, reuse and reduce. I felt slightly better about my wicked carbon-snorting ways when I was mending and making do. God. Must be getting old, huh? Nearly came to blows with a work colleague over my recent quasi-conversion to vegetarianism ( I love meat, but I now hardly eat it for several reasons too tedious to relate) and general attempt to live a more carbon-lite life. Said colleague snorted rather impatiently - oh, for God's SAKE, you buy cheap food don't you? To which I replied - never, I just tend not to buy meat because the decent organic stuff is so very expensive - but she interrupted to enquire nastily if 'we' ( I think she meant the Scots as a whole) were not so backwards that we had a Waitrose nearby. Waitrose being the most expensive supermarket in the UK. This wouldn't have been so bad if I hadn't been telling her how utterly broke we are. She was basically doing a Marie Antoinette, only instead of carolling let them eat cake, she was saying haven't you tried sourcing your asparagus and shitakes at Waitrose? Dwahling.

Actually, no. We shop locally. It does rather undo all the good of trying to buy organic and not from too far away and seasonal and, and, and if you then tack on a huge mileage to drive to the nearest Waitrose. Besides, read my twitching red lips, We Are Currently In A State Of Fiscal Frugality. We're enjoying finding new ways with beans, lentils, rice, cabbage and potatoes. I can say with hand on heart, my beanburgers are the business. I can cook meals of such meat-free perfection that you wouldn't notice the lack of dead beast. I'm amazed, myself. I would never have thought it possible that I could live without my slabs of high-class protein, but you live and learn.
Posted by Unknown at 6:34 PM 2 comments: