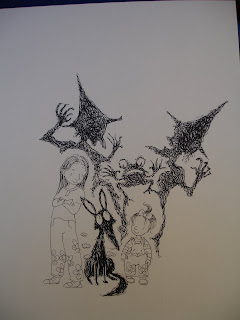 We seem to have reached that point in the calendar where the true awfulness that is February finally begins to kick in. Boy, has it kicked in. Not only is our household utterly stony broke but also, all around , things are going on the fritz. First it was the cd player, then the amplifier, then the sub-woofer that throbs and booms under my desk in the studio, then the washing machine refused to spin and yesterday my printer/fax/scanner combo demanded a new print cartridge ( I took out a second mortgage and robbed a bank and managed to get it what its little heart desired but I might as well have saved myself the effort) before finally sending up a little message on its screen which ( I swear) read like the digital equivalent of f.o.a.d - at which point I gave up on it.

It's unplugged and awaiting execution. Nope. I will not be granting it any last requests. A pauper's unmarked grave awaits.

Meanwhile, the only way I can send pictures/roughs down to London is to photograph them, download the photos onto i-photo and then email them. In winter light, you can imagine just how crappy they look. Actually, you don't have to imagine how crappy it looks - you can see for yourself. However, it's a rough for the cover of Witch Baby, and it does the job just fine, if rough(ly), I think. So, to add to the ongoing nightmare of coming up with a workable cover design, I have no fax or scanner with which to send images of possible workable cover designs. And no moolah with which to buy a replacement. Urrrgh.

Despite this, or perhaps because of it, I'm having a ridiculously good time doing the black and white illustrations for Witch Baby. Some of the pictures I'm really proud of, some of them have taught me more about drawing than I've learned in the past five years. I think what's happening here is that I'm s-t-r-e-t-c-h-i-n-g my ability to draw by being forced to work exclusively in black and white. Heck, I've never worked through a whole book's worth of illustrations in black and white before - with the exception of the little chapterheads for the Pure Deads and Deeps, and they're more decorative than illustrative.

So. This is different, and exciting and makes me really look forward to each day instead of dragging my heels and trying to find a million other things to do rather than Work. And in these difficult times, work that engages and enlightens and entertains is a Very Good Thing.
Posted by Unknown at 9:24 PM No comments: