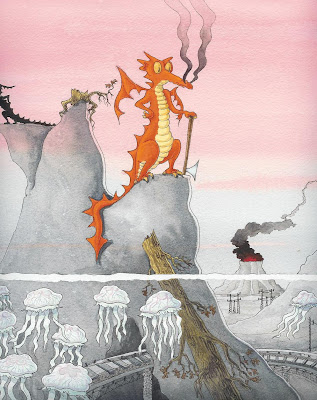 This is what I was raving about in yesterday's blog. It's only part of a much wider double page spread. All the dragons are surveying their drowned world, and this chap ( or chap-ess) has just chopped down the last tree.

What a laff, eh? Whoever said children's picture books were 'light' didn't know what she or he was talking about. This is such a sad book, with such a tough message and in my heart of hearts I am beginning to wonder if it's all too late. Then i take hold of myself by the scruff of the neck and Get On With...hoping.

The soundtrack to paint this picture was Joni Mitchell's latest album ,'Shine', and the title track in particular. It's a perfect 'fit'.
Posted by Unknown at 4:48 PM No comments:

Apparently one is not allowed to use the words 'Stitch and bitch' without seeking permission from the originator of the phrase. People have been sued for heaven's sake.

So. Ahem. Without seeking permission from camp-Stoller or whatever, the knitters of Shetland have sensibly gone ahead and retitled the group ' Makkin' and Yakkin''.The Makkin' was always the dialect name for knitting, and yakkin' speaks for itself, so to speak.

So there. My baby grows up and changes her name. Sounds about right to me. Soon she'll start staying out all night, smoking and having underage sex, but me, I'm a tolerant parent. I'll try my best to celebrate her independence, her determination to do it all Her Own Way, her desire to march to the beat of her own drum, but inside ( sniff) I'll always remember that first rainy, dark night when she was born in an upstairs room in the HQ of Shetland Arts.

Talking of which, Donald Anderson from Shetland Arts phoned yesterday to check that I'd had all the relevant bits of paper that I need in order to be paid my writer's stipend for the residency, and in conversation he mentioned that there was snow on Ronas Hill. This, dear reader was almost enough to make me beg, cajole or even bludgeon my entire family into putting our house on the market and moving to Shetland toot sweet. Snow? What might that be, pray?

I remember snow. I remember big snow - serious snow - fourteen foot snowdrifts, endless ski-able hills outside my door, snow that lay for the entirety of Christmas and beyond, snow that inspired my eldest child to build a snow dinosaur that stood taller than me, and longer than our family car. Snow that was playpark, menace, inspiration and danger all rolled into one. Snow that nearly killed my baby daughter and me one cold March day when my car went into an uncontrollable speedy slither and launched itself straight onto the prongs of an oncoming snowplough. Snow that appeared in so many of my picture books from Back Then that I can almost document from those illustrations when, exactly the snow stopped falling in our county.

Snow that makes you glad to be inside. Snow falling when you're tucked up under a warm quilt. Snow that hushes the roads, stop traffic and turns our world into a landscape straight out of Breughel. Snow on ronas hill had the effect of making me desperately homesick for an island that I only know in part.

In the meantime, I'm painting the dragons as if time is running out. The climate change illustrations reached their hideous climax with a spread in near black and white. A drowned world populated only by dragons and jellyfish. A volcano erupting in the distance makes the land look prehistoric, but it's not. It's our land with six degrees of warming. It's bleak and pitiless, but as a concession to the small children for whom this book will become night-time reading, I left out the methane hydrates and general apocalyptic vision of Mark Lynas's terrifying book 'Six Degrees. Our future on a hotter planet'.

If you have no idea what I'm wiffling on about, can I recommend that you read Mark's book? But hurry up - tick, tick, tick, there may not be as much time to change our wicked ways as we used to think there was.
Posted by Unknown at 6:15 PM 2 comments: 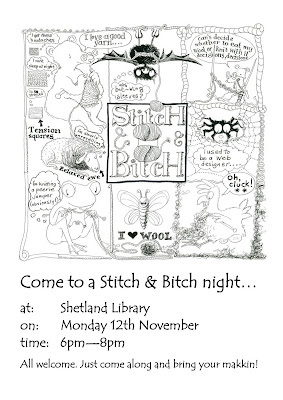 Yup. That's our baby. It takes its first unaided steps and staggers into its local library. Gosh. Such an intelligent child too. My only regret is that I won't be there to enjoy it, but hey, hope you like my poster. Right now I'm having a tension square, so it must be time to down tools and go drink coffee....
Posted by Unknown at 3:42 PM No comments:

First of November and I'm in a t-shirt, feeling the unseasonal heat. Outside, a confused ceanothus is putting out little blue flowers and some of the fruit trees, I swear, are budding. Oy veh, people. Do we mention the ten ton gorilla in the room or shall we just continue to pretend we don't have to change our Wicked Ways?

Make me good, lord, but not just yet. Let me just burn more carbon, eat the fruits of some thousands of airmiles and turn a blind eye to the slave labour that produced five pairs of socks for less than the cost of that lump of coal I'm about to throw on my home fire to keep it burning.

Cue the Carmina Burana in all its dramatic glory - as a soundtrack for my current mood, it's hard to beat.

So. I won't talk about the gorilla tonight. I won't mention the fact that I have a motheaten heap of warm sweaters, unworn for three years, waiting for the weather to turn cold. I won't speak about the possibility of going for a swim in the sea at the weekend, without courting frostbite. In November. I won't talk about the landslide currently blocking the road that rejoices in the name of Rest And Be Thankful but which should be renamed Can't Take Any More Precipitation So Am Turning Into A Mudslide In Protest.

Went back to the gym last week and revisited all that fun equipment designed for the express purpose of torturing one's flesh into some semblance of fittitude or full-on buffery. Not entirely sure that my flesh has got the message, given that it prefers to lie on benches groaning fitfully and revisiting every insult paid to its tender pillowyness. sudden and brutal rediscovery of stomach muscles was beyond painful. Every cough brought a squeak of dismay as newly awakened muscles shrieked in protest. The gym had been repainted, which was all a bit dazzling given that it was only six a.m. Why white? Why not a pleasant inside-of-eyelid maroon? Urrrgh.

Nothing much had changed. Everyone was the same shape they'd been when I left eight weeks ago. Some of them were more sun-tanned, some of them had recovered from injuries and were giving it big licks on the treadmill, some of them were pleasantly surprised to see me back again. It was every bit as soul-less and isolating an experience as it sounds. Just another place where I don't really fit in despite three years of trying to make conversation. Still, it gets results.

Went for my first longish run since my horrible foot injury in May. Michael and I went to Aberlady beach ( bird sanctuary, no dogs, no dog-poo but loads of birders/twitchers/ornithologists) and he walked very fast while I ran. and gasped. And sweated and heaved. A thousand deaths were died, including my i-pod which did its flaky lock-up nonsense, and since I had no breath for running, let alone looking down and futzing around with a bit of crap technology, I had to run for the first twenty minutes in silence. Yeeeeurggggghhh. I'm one of those pathetic runners that needs music or else I spend every second trying to bludgeon myself out of packing up and going home. Fun times. NOT. Then, miracle of miracles, the i-pod self-healed and suddenly there was thumpy music with big bass action and I was off in a cloud of kicked-up sand like the nasty bloke on those old Bullworker ads.

Phwoarrrrr. She lives. She runs. She whizzes past weird posses of twitchers stationed all along the beach with their bins and 'scopes hopefully not trained on Lesser Beetroot Wheezers, or Small Gasping Coldtits or that rare winter visitor to our shores, the Blissed-Out Earbud Waggler.
Posted by Unknown at 9:23 PM No comments: