In praise of old school 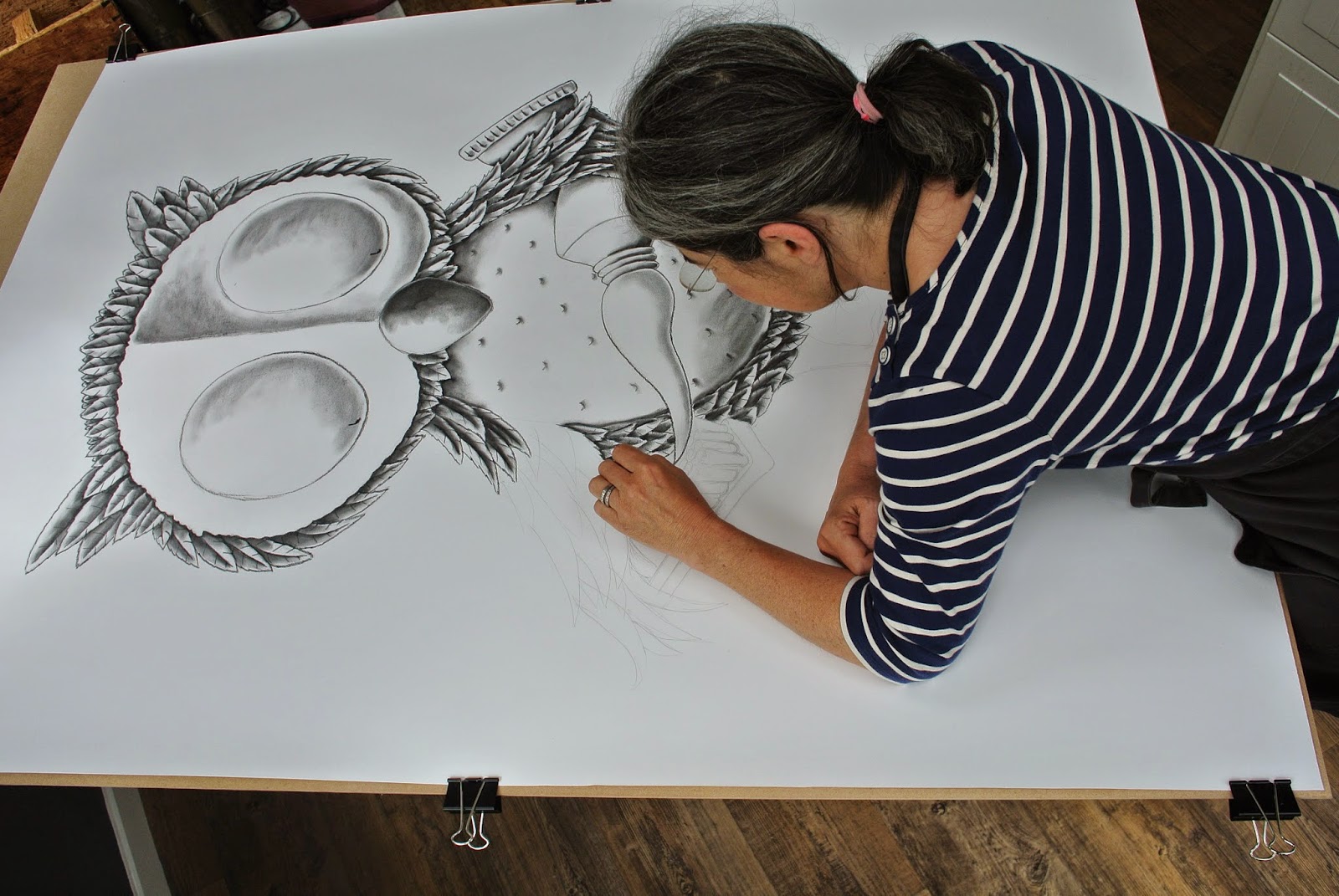 We've had a bit of a systems upgrade here ; dragged kicking and screaming into some new version of OS X that has added greatly to my sum of grey hairs and deepened forehead furrows and depleted bank accounts, but hey... it had to happen some time, and I judged that now was as good a time as any. I took myself off to the nearest Temple to consumerism and joined the sheeple, poking and prodding in worshipful adoration of all things shiny and new.

As I explained what I needed a new slim metal connected ether-brain for, I came up against my old-fashionedness as an illustrator. No, I didn't need to run the most recent version of i-DrAFT or rembrandt proTools. No, I wasn't remotely interested in acquiring a mat thingy that I could draw on with a digital stylus which would connect to the thunderbolt portal, or was that the lightning door, or was it the usb hubble or - och, feeeech. And when I hauled out a notebook and wrote myself some reminders with a -gasp- pencil - I felt like a small but very cross time-travelling dinosaur being peered at by a group of wet-behind-the-ears student paleontologists.

Paper, pencils, charcoal, light from the sun. Watercolours. Such things don't need an instruction manual or a menu. They do require a lifetime's study, giving up their secrets one by one, and rewarding my patience by happy accidentals ; a smudge here, a granular texture there, a glorious gradation from light to shade that simply happened in exactly the right place and the perfect density of grey to black... such things make me stand back from my drawing and take a deep and happy breath.

I tend not to do that too often, standing back from my new, slim, metal, connected ether-brain. More a holding of breath and hoping against hope that I haven't done something too awful, wiped anything irrevocably or mangled a file beyond repair. Must ask at the Temple if there are specific prayers or hymns suitable for such occasions. Here in Outer Caledonia, we tend to use the simple forms ; Ya Beauty for those moments when files synch correctly, and the Och ya wee toly for system crashes, kerning nightmares and the black screen of doom. O spare us... 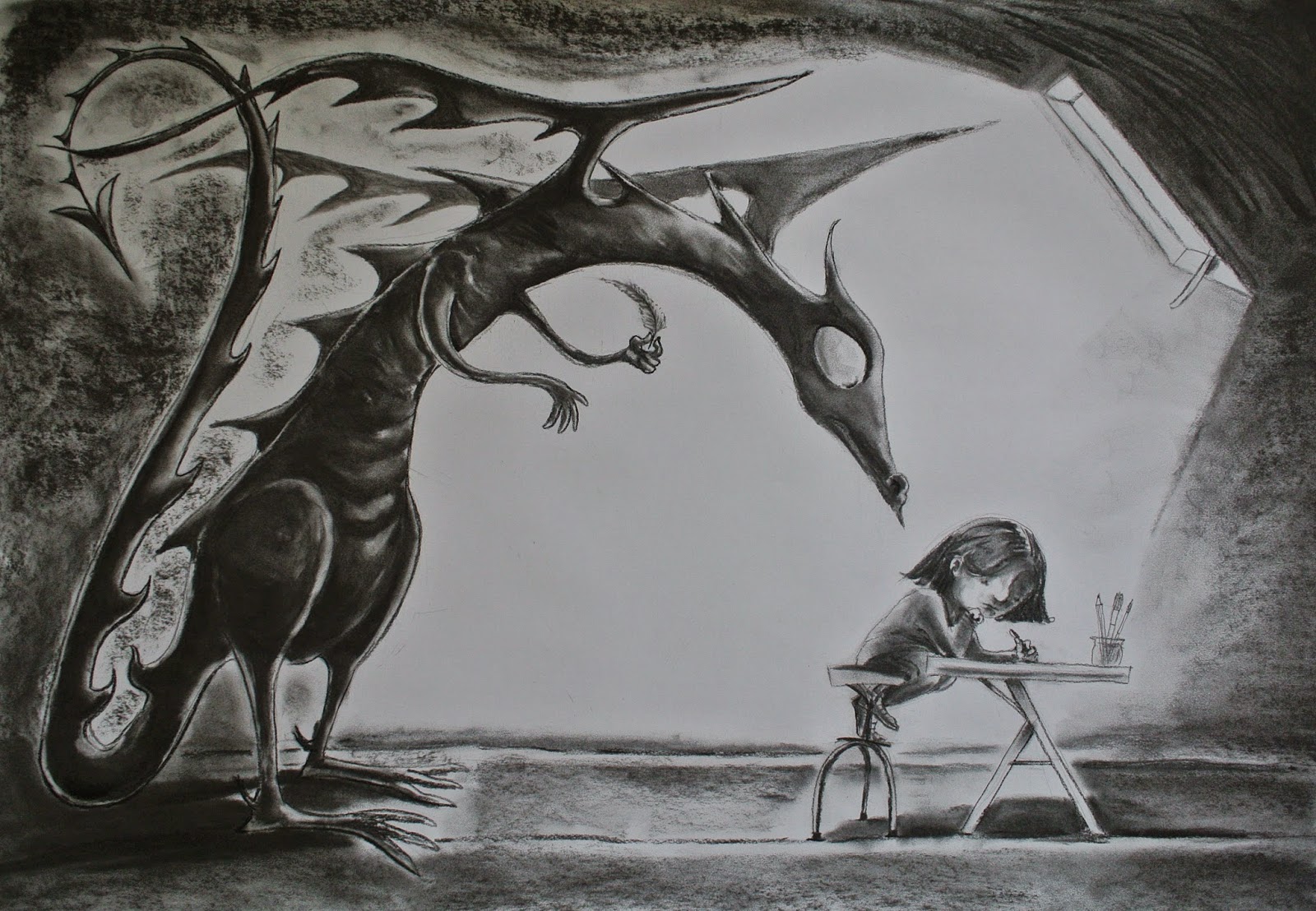 Posted by Unknown at 9:33 PM No comments:

A little film about books and stories 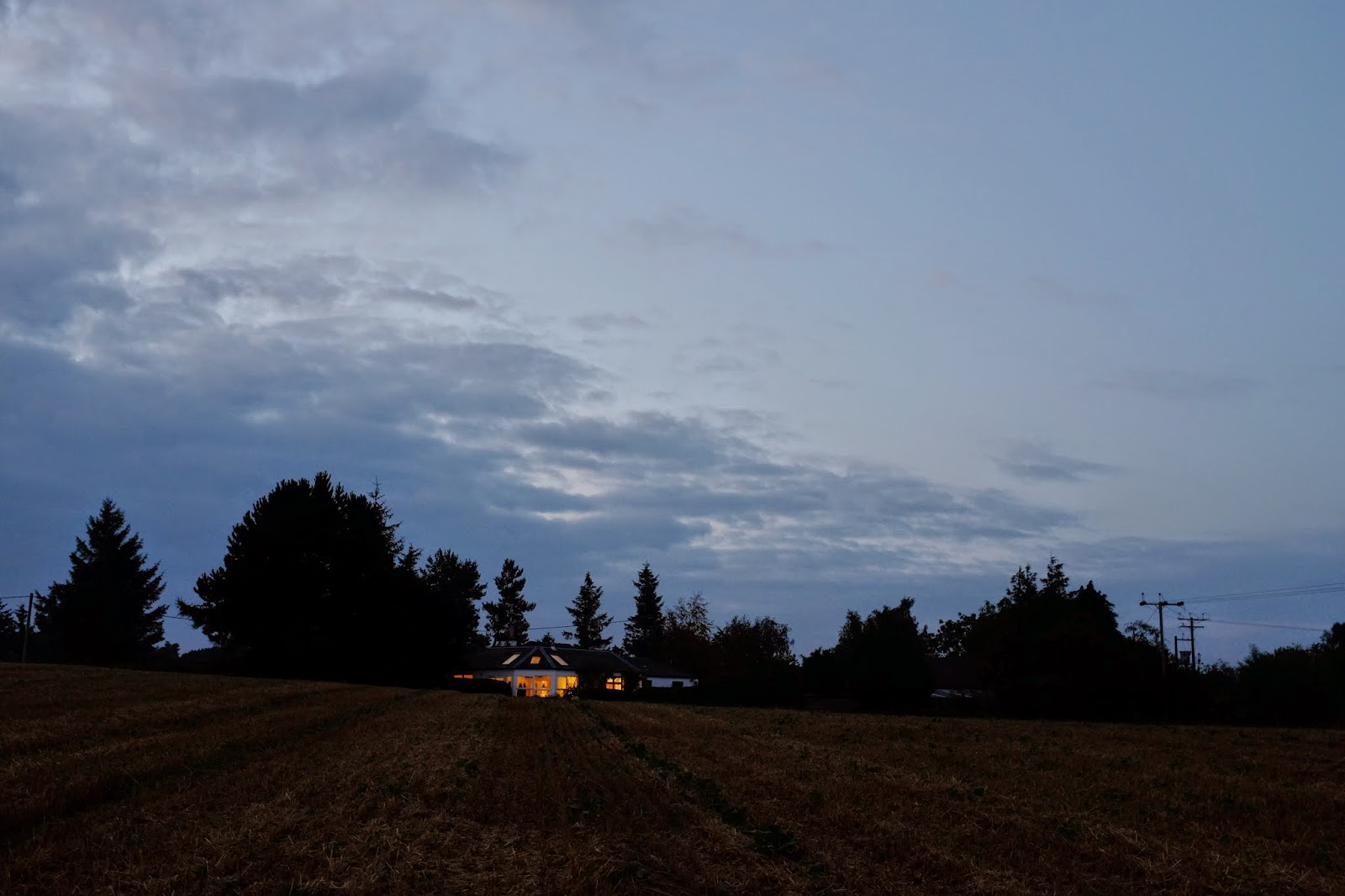 Winter twilight. I love this time of year ; the colours of the skies, the glowing windows, the fact that rib-sticking food is allowed, nay encouraged all contributes to the overall feeling of hunkering down, digging in and hibernating. We wrap and layer and go for long walks, always returning to the mothership and the comfort of casseroles of root vegetables and pulses and beans. Don't pull that face - I can do a lot with a lentil - all those years as an art student taught me something useful, you know. And knitting ; I become a thing of wool and felt and hitherto undiscovered craftiness in the winter ; the plummeting thermometer seems to bring out my inner Ravelry-ite.

And spending the winter holiday with family ; having grown-up children home, the household filling with their presences, their voices; truly this is one of the best times of year, made even better, even more precious by the fact that due to divorces and other arrangements, we only have a full house once every two years. I look forward to this brief time with my grown-up children, this ( at most) seventy two hours for an entire  730 days until it rolls round again.

So. Imagine my dismay when December began with a series of migraines that simply kept on going. One after the other. Day after day. And December's such a relaxed month, right? Nothing to do, much. I kept taking my migraine drugs ( one of the triptans) and the migraines just kept on rolling in, 4 a.m being their preferred arrival time. We had a big family dinner planned for the 21st ( Winter Solstice, in honour of the turning of the year) and I briefly thought about calling off, but decided to keep on going.

So did the migraines.

As the last guest left in the early hours of the 22nd, the mother of all migraines arrived. I chugged a triptan and nothing happened. Twelve horrible hours later I took another and it worked, sort of. I appeared to have reached a well-documented point where I'd overused these wonder-drugs to the extent that they were now actually causing the headaches I was taking them to alleviate.

And the cure? No more drugs. For quite a long time. Which means NO DRUGS. No dental work then. I'm trying to feel sorry about that and failing. It also means if I fall over and break a leg, I'll have to be all manly and stiff-upper lipped. Oh dear heavens, this is so not me. And as well as normal migraines whatever that may be, I'm also having a period of withdrawal from triptan overuse as my outraged pain sensors reset themselves back to normal. This is what I'm now doing. The last headache I had earlier this week, courtesy of triptan withdrawal was a 72-hour blaaaargh which I'm in no hurry to repeat, but may well have to. 72 hours of lying still with my eyes shut. I can't even listen to the radio, it's like being sandpapered till I bleed. And somehow I'm supposed to eat and drink when food tastes like burnt rubber and moving my head to get fluid down my neck makes me feel like...

Don't know where, don't know when the next headache will show up, but understandably, I don't want to go anywhere too far from
a. home
b. bed
c. my own little bedside bucket to throw up in
d. my freezer ( purveyor of ice for ice-packs)
e. people who love me and understand that this is every bit as horrible as it sounds and that I'm not drunk ( I get quite dizzy) or a revolting woman ( well, throwing up in public isn't very attractive)

On the plus side, this coming year (once I get this headache/drug nonsense sorted out or at least down to a manageable level of shriek-fest) will be an amazing one. I'm looking forward to several brilliant projects, books and residencies and can't wait to wiffle on about what shape they're going to take BUT

my ancient and trusty mac is about to flatline here so I'd better wing this out on the ether before I run out of battery life. Laters xxxx

Posted by Unknown at 9:17 PM No comments: