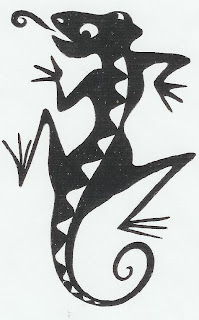 Met the nastiest chiropractor yet. Arrogant, sniffy, clammy handed ( oh, yeeeurch - and for this I pay?) and single clammy-handedly he managed to finish off what shreds of faith in alternative medicine I was clinging to. Leave my neck alone, you fiend. Of course, way too polite to tell him to feck off, but I wish I was less bound by good manners. I won't be rushing back. And still no end in sight for me being the limping thing that once ran on beaches. For hours.

Each day that passes I feel my freedoms shrivel. Who'd've thought that such a simple thing as running could have been such a bliss. And the flip side being that without running I am gelded. Hobbled, then. Earthbound, fettered - oh, shut up me.

Meanwhile, the Dragons are progressing beautifully, even if I can't see it. Now two thirds through their sketches, and emerging into the light of finding my book take shape under my hands. Soundtrack for the work thus far has been a weird mix of the high camp Scissor Sisters and the internalising oddness of David Sylvian's solo albums. with the odd bit of Fatboy Slim for light relief. I'd get up and dance, to the first and last, if my injured foot was up for it, but sadly, it ain't.

And the shawl-from-hell progresses but slowly. Will update with a picture when I can actually knit a section without hideous holes appearing where either teenage daughter or eldest son have demanded my full and undivided attention ( and not in a good way, she said darkly) and rather than start screaming, I've found myself dropping stitches like a true fumblethumbs or inventing whole new webby patterns like a deranged spider. In later years I'll be able to point to whole sections of the shawl and say -and THAT hole was when you told me you were
pregnant / still taking drugs / in debt to the Triads/ leaving for New Zealand / running as BNP candidate

I am joking, but only slightly. Poor shawl. Poor them. It will, as they say, all come out in the wash.
Posted by Unknown at 2:17 PM No comments: