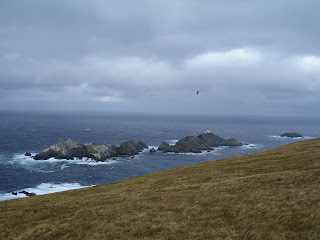 Finally hauled out the contents of a little cardboard box called the Pilates Bodyband Kit, subtitled 'for sad gits who delude themselves that nearly five decades of becoming one with your sofa, booze and fags can be undone by the mere application of the contents of this small box'. Yeah, well. I bought into it nearly two years ago and it has lain in silent reproach in a back bedroom which also goes by the other name of Mum's museum of unused body sculpting artefacts that we don't talk about.
So.
Must have been bored or a passing cloud drizzled a shower of diluted masochism instead of rain or something. I mean it's not like I spent the whole of this Sunday in navel-gazing, chocolate consuming and general lounging in a feckless fashion and was in dire need of Pilates to do penance for being so couch potato-ey. God. If only.
No. I was up early hurling kit in a rucksack, ready to hit the hills again, this after a hideously strenuous Saturday when I trekked the ten mile round trip to Uyea which is a tidal island of spectacular beauty, but on which one can come horribly unstuck if one gets the tides wrong. I arrived at high tide, so there was no chance of crossing over to the island, but just to gaze down, down, down to it ( did I mention that to get to the tidal bar you have to abseil down a slippy cliff? No? Guess what? Neither did my guide books, damn their eyes)
Anyway, I was pretty buggared before I got up early this morning and hauled myself over the island of Yell and onto the island of Unst and drove to the northernmost car park in the UK and walked out onto the headland at Hermaness. In the teeth of a gale. Across featureless peat bog of a particular stickyness to make each step weigh ten times more than it should. Then, with no warning, the peat bog gives way to sheep-cropped grass and then - whoa, jeez, to sky. Sky by the acre. There are no signs saying 'this is the Edge of all things' or 'mind out, fumbledyboots' or even '739 witless hillwalkers have fallen to their deaths here, so don't make yourself the 740th, eh?'
Steep, it was. Beautiful, too. According to the os landranger map ( sheet 1, ref 600165) this spot in the middle of the back of beyond even rejoiced in the name of Toolie, but hey, Unst has a village called Basta and nobody has altered the roadsign.
Down at the foot of the cliffs the sea was lashing the rocks, but this was made all the more awesome by taking place in total silence. The guidebook had promised puffins, gulls and deafening birdsong, but today was too windy to encourage such clamour. I skirted the cliffs until I came across two sheep doing the Head-Butt of Doom over the exact ownership of a particular blade of grass - a dance which was likely to bring not only the sheep but me as well rolling and bouncing across the grass only to tip to our deaths on the rocks below. I carried on, but headed inland for safety. And on and up Hermaness hill under the harsh chatter of ravens trying to persuade me to ferk off and leave their territory alone.
And what a territory it is. The most northerly point in the UK. There's a tiny lighthouse ( Muckle Flugga) out there on the guano-clad rocks, and beyond that, there's a little rock called Out Stack and that is all she wrote. That's the North. The Northiest Northness of Northern Scotland.
So I turned back, headed up to try and find a tiny bit of shelter and toasted it's Ultimate Thulity with a wee dram. Then looked at my watch and realised I was going to have to leg it back to the car at a rate that wasn't consonant with navigating peat hags, but which might just get me back to the first ferry in time to make it and thus also make the second ferry back to Shetland.
So after a day like this, why the Pilates? I have no idea. The box held a video and three elastic bands. It signally failed to also hold a wee note saying Oy veh, and for this you paid how much? So I slung the video in and before I knew it I was in a world of Antipodean svelteness and new-age nose flutey music and I was doing weird things to my tush with a vast swatch of elastic.
Go figure. Some things you just can't put a price on...
Posted by Unknown at 11:56 PM